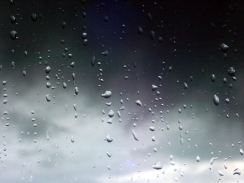 The rain has happened every day this week on the Go Local Food fields. Showers said the weather forecaster. Big and heavy, short and heavy, joined up in gangs to become longer periods of heavy rain.

The picking of the crop share on Friday was a dismal affair and all the work shares were wet after being outside in the rain picking beans and Ian was no more dry in amongst the leeks.

The rain has caused the cabbages to eventually split. Would that be ready cut coleslaw then?

The wet weather will have also made the moving of manure to work into the double digging that is ongoing in the cucumber bed in the poly tunnel joyless too.  This week it was the turn of Yola and William for that job.

Even the wildlife has taken shelter from the rain.

The rain has also held up jobs like lifting the 200 metres of main crop potatoes and cutting tops of hedges – that will be work for next week then if the weather becomes clement.