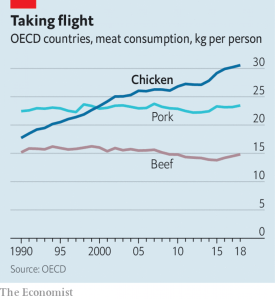 IN A SHED on a poultry farm just outside Colchester, in south-east England, thousands of chickens sit on piles of their own excrement. The facilities will not be cleaned until after the birds are killed, meaning they suffer from ammonia burns and struggle to grow feathers. Ants and maggots crawl over the bodies of those that have not made it to slaughter. The chicken industry is a dirty business, but it is also a profitable one. In the OECD, a club of mostly rich countries, pork and beef consumption has remained unchanged since 1990. Chicken consumption has grown by 70% (see chart).

Humans gobble so many chickens that the birds now count for 23bn of the 30bn land animals living on farms. According to a recent paper by Carys Bennett at the University of Leicester and colleagues, the total mass of farmed chickens exceeds that of all other birds on the planet combined. In London, some 50 miles west of Colchester, fried-chicken shops are ubiquitous. Many are named after American states (including Kansas and Montana, not to mention Kentucky). But schoolchildren and late-night partiers are unfazed by the strange names. Nor do they worry much about where their meal came from.

Fans of cheap chicken have selective breeding to thank. In the 1940s America launched a series of “Chicken of Tomorrow” competitions for farmers. The aim, as described by a newspaper at the time, was to produce “one bird chunky enough for the whole family—a chicken with breast meat so thick you can carve it into steaks, with drumsticks that contain a minimum of bone buried in layers of juicy dark meat, all costing less instead of more.” The result was something along the lines of the modern broiler chicken.

Since then chickens have continued to get bigger. A study by Martin Zuidhof of the University of Alberta and colleagues documented this shift by comparing chickens that were selectively bred in 1957, 1978 and 2005. The authors found that at 56 days old the three birds had average weights of 0.9kg, 1.8kg and 4.2kg (see chart). As raising a single big bird is more efficient than raising two smaller ones, it now takes farmers just 1.3kg of grain to produce 1kg of chicken, down from 2.5kg of grain in 1985.

The intense use of antibiotics means that farmers no longer need to spend much time worrying about their chickens’ welfare. Before the second world war, most birds were raised on small plots. Farmers kept hens for eggs and sold their meat when they got too old to lay any more. But prophylactics have allowed farmers to pack chickens into conditions that would once have been considered unthinkably cramped and dirty. Birds raised in denser quarters do not move around much, and so require less to eat.

Farmers have also benefited from the healthy reputation of chicken. In the 1980s doctors worried that by eating too much beef and pork people were ingesting lots of saturated fat, which was then thought to increase the risk of heart disease. Those fears have since waned, but new evidence suggests that red meat might increase people’s chances of getting colon cancer. In contrast, poultry’s image as a healthy meat survives unscathed.

Feet and feathers
It is not just fussy Western eaters who increasingly favour chicken. Rising incomes mean that demand for the meat is growing even faster in poorer countries. As a result, chickens are now the world’s most widely traded meat. In economic terms they are, in effect, the opposite of cars. They are produced whole. But their value is maximised once they are broken up.

Though Westerners prefer lean, white meat; many in Asia and Africa prefer dark meat, which includes legs and thighs. These preferences are reflected in local prices: in America breasts are 88% more expensive than legs; in Indonesia they are 12% cheaper. Differences in the price of chicken feet are even starker. The thought of eating talons is abhorrent to many Westerners, but they often feature in Cantonese recipes. China now imports 300,000 tonnes of “phoenix claws” every year.

The fact that different countries specialise in different kinds of production also boosts trade. America and Brazil, the world’s two biggest chicken exporters, are agricultural powerhouses that grow huge amounts of feed, the main cost in poultry production. Thailand and China, in contrast, dominate the processed-meat market which requires cheap, skilled labour. Russia and Ukraine, once net importers of chicken, have become net exporters as their grain industries have grown.

Producers that sell their meat abroad expose themselves to risks. Chicken has been a flash point in trade negotiations. China imposed tariffs on American birds in 2010 and then banned all imports in 2015, shortly after an outbreak of avian flu. Industry observers are pessimistic the ban will be lifted, much to the dismay of American farmers who would love to be paid more for the 20bn chicken feet they produce every year, which currently become animal feed.

Similarly, the European Union banned the import of chlorinated American chicken in 1997, owing to concern that a chlorine wash allows lower hygiene standards in farms. Arguments over chlorinated chickens also proved a big stumbling block in negotiations for the Transatlantic Trade and Investment Partnership, a now-failed trade deal between America and the EU. Some Britons fear that if they leave the EU any trade deal signed with America would require them to accept imports of such chickens.

Although the chicken boom has been good for consumers, animal-welfare advocates worry that the meat industry’s cost-cutting measures have come at the expense of the birds. Vicky Bond of the Humane League, an animal-welfare campaign group, says the size of modern chickens is the cause of the worst problems. Broilers have breast muscles which are too big for their bones to support, leading to lameness. In Colchester the chickens are so unresponsive to humans that they resemble zombies. Indeed, modern chickens have become so big that their muscles prevent them from getting on top of each other to mate (meaning they have to be starved before they are able to consider romance).

Partly because of advocacy by animal-welfare charities, and partly because meat has become so affordable, more consumers are now willing to pay for meat raised in better conditions. Sales of free-range and organic chickens, which—unlike most broilers—have access to the outdoors, are surging. In the Netherlands, a recent public outcry over enormous plofkip (which translates as “exploded chicken”) was so intense that retailers switched in droves to breeds that grow more slowly. Plofkip’s share of the Dutch market plummeted from around 60% in 2015 to 5% in 2017. In Britain sales of free-range eggs have overtaken those of caged ones.

Concerns about the health of livestock have also led the EU to pass some of the world’s strictest animal-welfare laws. Battery cages for egg-laying hens were banned in 2012, for instance. Legislative reforms have been harder to come by in America, especially at the federal level. Animal-welfare advocates lament the country’s congressional system, which gives disproportionate clout to rural states. Nevertheless, a rare but significant state-level change came last November when Californians voted to pass Proposition 12, which will ban the production and sale of pork, veal and eggs from animals kept in cages, bringing the state’s laws roughly in line with those in the EU. The change affects all meat producers who want to sell in America’s biggest state, putting pressure on them to change their farming practices.

Public companies have been more responsive than lawmakers to animal-welfare concerns. Activists have achieved remarkable success in recent years by threatening companies with the release of unflattering images and videos of how their food is produced. Research by the Open Philanthropy Project, a group which funds animal-welfare activists, finds that such campaigns have prompted more than 200 American companies—including McDonald’s, Burger King and Walmart—to stop buying eggs from chicken raised in battery cages since 2015.

An idea is hatched
Farmers are therefore increasingly interested in improving the lives of their birds. Richard Swartzentruber owns two chicken sheds in Greenwood, a small town in Delaware. The company he supplies, Perdue Farms, has stopped using antibiotics altogether. Mr Swartzentruber’s chicken sheds have plenty of windows and doors that open onto a fenced grassy field whenever the weather permits. This comes with trade-offs: chickens might like perching on trees, but so do hawks. Inside the sheds, bales of hay, wooden boxes and plastic platforms are scattered around to entertain his chickens. Such measures have helped him gain a good-farming certificate from the Global Animal Partnership, a charity.

Bruce Stewart-Brown, a food-safety scientist at Perdue Farms, says that his company would love to raise more organic chickens. His ability to provide higher-welfare organic meat is ultimately constrained by market forces, since the feed legally required is pricey. Although larger numbers of people might be willing to pay more for organic or free-range products, most still prefer whatever is cheapest. And, despite growing interest in vegetarianism and veganism, surveys find little evidence that many people in the rich world are turning into herbivores. People may like flirting with plant-based diets. But what they really love is chicken.